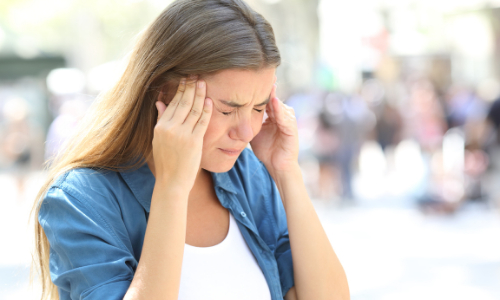 I woke up with my head just absolutely throbbing. The pain was almost paralyzing. I looked at the clock to see what time it was but it was hard to see because my eyes were blurry.

I rolled off the bed and began crawling the familiar route to the bathroom. The pain radiated through my head with each movement. It felt as if someone had taken a baseball bat to my head and left me to deal with the aftermath. But there was nobody in the house with a baseball bat. It was just me and the pain.

This was another migraine.

In the bathroom, I grabbed my emergency medications and eagerly took them. Then, I just laid down on the floor and waited for the medicine to take effect.

An hour or so later, the pain having subsided a little, I was able to gather myself enough to go back to bed.

Sometimes the migraines weren’t always this severe. Sometimes I would get one that just made me light sensitive and nauseous, but it would last for days.

In 2010, I got a migraine that started in the spring and lasted for nearly a full year.

I would wake up with it as a dull ache but it grew in intensity throughout the day. Most days, I was able to work but by the end of the day, I would to have my sunglasses on while inside.

Throughout all of this, I saw doctors, had my brain scanned, and took all sorts of medications – at one point, I was on 3 different meds just for migraines. My primary doctor was at a loss because all of my bloodwork and scans came back “normal”.

I cut every food out that I thought was a trigger, I got my eyes checked, I didn’t eat out so I could control what went into my body. I cut way back on workouts because they often would make the migraine worse. I basically limited anything that I thought could be contributing to them.

Yet, the migraines kept happening.

I felt really stuck and lost.

For a long time, I thought this was just the way life was going to be for me. I thought I was destined to walk on eggshells for the rest of my life, never knowing what was going to trigger the next migraine.

But one day, after a particularly rough migraine, I decided that enough was enough. I was tired of planning my life around my migraines and I was tired of them holding me back from living my life.

To me, every day I had a migraine equaled one day less of living the life that I dreamed of.

I realized that I needed to do something different than what I had been doing…because you can’t keep doing the same thing over and over and expect the same result.

I felt like I had exhausted all my options with the medical community. It was time to try something new.

So, I found myself a functional health coach and signed up to work with her. Through functional lab testing and analysis, she was able to show me where all the different strategies I had been trying were failing me.

We were able to put together a custom plan that worked for my body and needs…and within just a few weeks, my almost daily migraines were a thing of the past. First, they went down to 1-2 times a week, then to a few times a month, then once a month, and then none at all.

Now, I can’t remember the last time I had a migraine – it’s been many years.

>> No more planning my life around my migraines.

>> No more giving up my dreams because migraines were in charge.

I recently was asked what ultimately were the contributing factors to healing my migraines. And I’m happy to share these with you too – because I remember from my days that I was always looking for answers.

But remember that the root cause for everyone will be different.

The things that I think had the biggest impact on my migraines were:

I don’t think those were the only things, but they were the big ones. I know that seems like a lot, but as I addressed each thing, the migraines became less frequent and less frequent until they just completely stopped – while at the same time, my energy kept improving and my brain fog lifted.

It wasn’t an overnight thing – it took some time for them to go away completely – but eventually, it happened.

And I will tell you that I never thought I’d be rid of migraines. I really thought this was my destiny.

My hope for you, Launa, is to experience the same kind of freedom as I have. If I was able to get rid of migraines that I had for over 20 years then you can do it too.

You just may not have tried the right thing yet.

I also hope that you can understand from the list above that migraines (and ALL chronic health issues) aren’t usually tied to one single thing – the body is interconnected and works very much in harmony.

That’s also why when you try one single supplement or therapy that you read about online, it feels like it is not working.

It might be part of the solution but it’s likely just one piece of the puzzle.

Finally finding my path to healing and realizing it doesn’t have to take forever is the whole reason I decided to go back and get certified to run labs and be a functional health strategist in my 30s.

I was so mad that the traditional medical model had failed me and that I could have gotten better faster. I wanted to support people in getting their lives back so they can truly thrive and do all that they desire.

And if you’re ready, I want to help you. Let’s talk so I can hear more about what’s going on with you and explain how I have helped others in similar situations.

Or book a strategy call with me by clicking here.

We all deserve to feel our best and live our best lives ever.