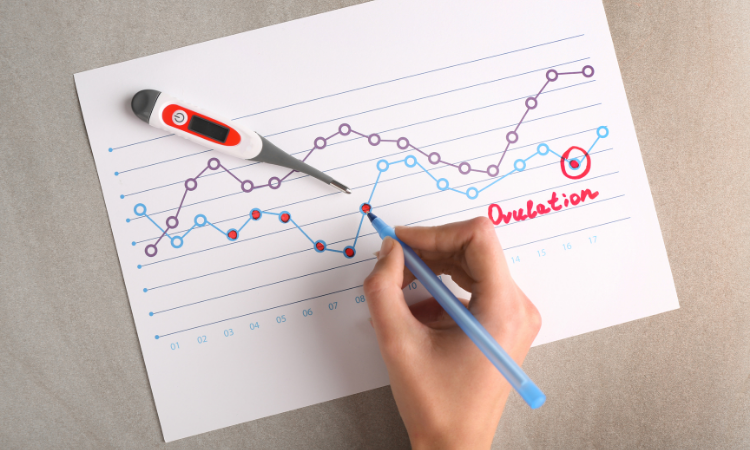 The first thing that comes to mind about ovulation is that you better get busy if you’re trying to conceive. If babies aren’t on your agenda, then you’ll be extra careful. But there is so much more to the ovulatory phase than just baby-making.

Whether you’re ready to conceive or not, achieving healthily, balanced ovulation has countless benefits to your body and mind. It’s also the time of the month that women tend to feel their best and have the most energy.

Let’s see how you can take full advantage of these days of the month and biohack the heck out of them.

What’s Happening in Your Body?

Ovulation triggers a whole orchestra of hormones working together and triggering various actions. It’s easily the most complex phase of the menstrual cycle but so crucial to your overall health.

During the follicular phase leading up to ovulation, estrogen is on the rise. Estrogen increases the amount of cervical fluid you produce. It turns out that our vaginas are a hostile environment ph-wise for sperm. The cervical fluid protects the sperm and helps move it up the cervix. Without it, sperm quickly dries up and dies.

Estrogen will also change the position and texture of your cervix. The closer you get to ovulation, the higher your cervix will sit and the softer it will be. Rather than feeling like a hard tip of a nose, it will feel soft and moist like lips. You may even notice an indent or small opening in it.

When estrogen reaches its peak and your uterine lining is thick and ready to host an egg, your brain releases the chemical gonadotrophin-releasing hormone (GnRH).

These two hormones are essential to a healthy menstrual cycle. FSH stimulates the growth of the eggs in the ovaries and is at its highest level just before the egg is released.

High levels of LH trigger the release of the egg, which then moves down the fallopian tube toward the uterus. The egg only lives for about 24 hours if it doesn’t meet up with the sperm.

Testosterone is also at its highest peak during these few days, which increases your libido. It’s another push from nature telling you, “Get busy already! We’ve only got this egg for 24 hours!”.

Now, this doesn’t mean that you’re only fertile for 24 hours. The cervical mucus keeps sperm alive for 5 days, making the fertile window actually 6 full days. The rest of the month, it is not possible to get pregnant.

Meanwhile, the follicle that released the egg forms a tiny mass of cells called the corpus luteum, which produce progesterone. Progesterone is essential to maintaining a pregnancy because it allows the uterus to grow. It supports the uterus lining, and it helps with the blood and oxygen supply to the baby.

If you do not become pregnant, both progesterone and estrogen will decrease until another menstrual period is triggered.

See the image below for a visual of what’s going on with your hormones:

Ovulation isn’t just for baby-making purposes. The entire process is highly beneficial to the balance of your hormones. It’s also a sign that everything in your body is working correctly. In fact, many health practitioners consider this a woman’s 5th vital sign (next to temperature, pulse, respiration, and blood pressure).

Not ovulating or irregular ovulation could be a sign of a thyroid problem, insulin resistance, extreme stress, undereating, or conditions like PCOS.

Because ovulation leads to a spike in progesterone a few days later, not ovulating could mean you’re progesterone deficient. Low progesterone increases your risk for miscarriage, causes weight gain, depression, and mood swings, affects your breast health, and even contributes to some cancers.

How to Know If You’re Ovulating?

Some women have a monthly period but aren’t necessarily ovulating. You can track and confirm ovulation by observing your fertile signs. These include:

Because not every woman experiences all these symptoms, it’s important to track them each month to see what’s normal for you.

Some women may also experience anxiety during this phase due to elevated hormones.

You can also confirm ovulation by tracking your waking body temperature each day. Progesterone triggers a temperature spike that lasts after ovulation until the first day of your period.

My favorite way to track is using Natural Cycles. They are an FDA-approved form of birth control that is an app and a great way to learn about your body!

During the ovulation phase, your brain’s social and verbal centers are stimulated by the surge of hormones. You’ll feel most up to socializing with friends and meeting new people.

If you can, try to schedule meetings, presentations, interviews during this week. You’ll naturally feel more confident, be more outgoing, and be better able to express yourself verbally through these conversations.

Your superpower this week is COMMUNICATION!

Because all of your hormones peak during the ovulation phase, it’s essential to eat foods that help flush out excess estrogen. When your body can’t break down the estrogen in your liver and gut, you experience symptoms like acne or ovarian pain.

The high estrogen level also reduces carb cravings (stick to lighter carbs) and increases energy, so protein and fat are essential to sustain that energy. At the same time, plenty of fiber is needed to detox excess hormones.

Antioxidants are also important during this as they further support the liver in detoxification. Raw veggies are ideal for fiber, and fruit is high in antioxidants.

Foods to include in the ovulatory phase are:

How to Exercise During the Ovulatory Phase

You’ve got plenty of energy to burn during ovulation. The combination of high estrogen with high testosterone makes it the ideal time to head to the gym for high-intensity interval training, Tabata, or bodyweight circuits.

How the Ovulatory Phase Affects Your Relationships

Communication and social connections are at their peak this week. It’s the perfect time to make plans to go out with friends, go to parties, and go out on dates.

P.S. Not only will you feel sexier during ovulation, but studies show that ovulating women are more attractive.

Intimacy During the Ovulatory Phase

Expect the ovulatory phase to be the best sex of your cycle. It’s the week of hot and steamy passion.

Testosterone’s effect on your libido should be evident at this point. You’ll be more interested in sex, and it will feel better thanks to a large amount of cervical fluid present. Because of the spike in hormones, sex will also be more satisfying.

Communication During the Ovulatory Phase

If you identified something you needed to talk to your significant other about during the menstrual phase, hopefully, you wrote it down. The ovulation phase is the time to get up and out any serious discussions or feelings. You’ll be the best at articulating your thoughts and more open to finding solutions and addressing concerns together.

The ovulatory phase is the main event of your menstrual cycle. It’s a lot like summer break; fun, empowering, and memorable. So take full advantage of the mid-cycle boost. Make connections, burn energy, and just enjoy it.

Remember that progesterone that’s released during ovulation is essential to a healthy, symptom-free menstrual cycle. So if you’re not sure if you’re ovulating, it’s important to find out why. Book a call with me so we can get to the root cause together!