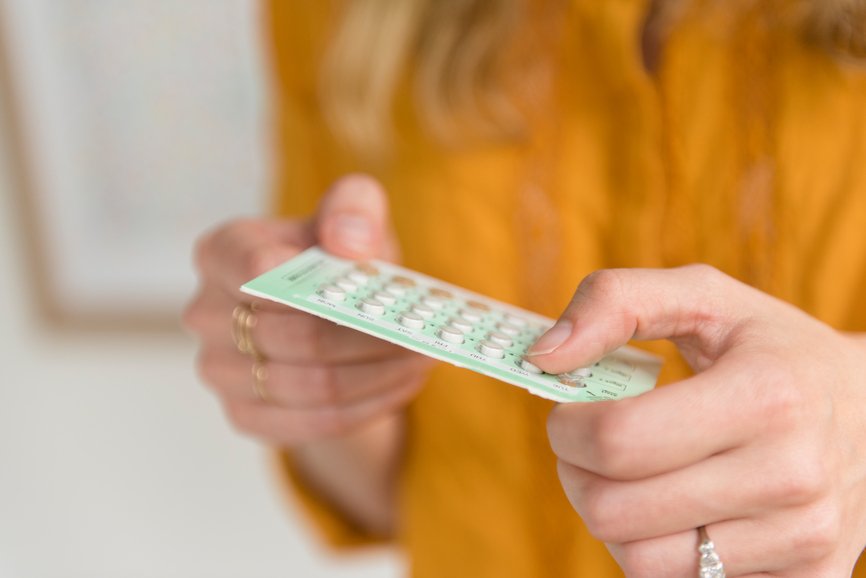 I was on the pill for over 12 years. During that time, I used two different formulas of the pill before deciding it wasn’t for me any longer.

The first time I quit the pill, after being on a low-dose estrogen one for 11 years, I was miserable. My period was not regular and would show up weeks late, I had really bad mood swings, my PMS was off the chart.

Then I tried a different pill formula and that made me feel even worse. My anxiety and depression came on really strong, I hardly ever could fall asleep and when I finally would, I would wake up multiple times, and I felt exhausted all the time.

So I quit cold turkey again.

What I know now that I didn’t know then is that my body was being put under a ton of stress by being on the pill and I should not have just gone cold turkey without having a plan in place to support my body.

The pill is a medication and just like with any medication, we want to be cautious as we transition off of it.

If I had put a plan in place to support my transition off of it, my periods would have regulated themselves sooner, I wouldn’t have dealt with PMS at the levels that I did, my anxiety, fatigue and depression would have likely been much milder.

I proved this later one when I came off the copper IUD, because I had a lot more success due to putting the right interventions in place.

So I thought I’d share with you, at a high level, what I did when I did successfully come off birth contorl once and for all because it’s exactly what I’d do again:

Before you breeze past this section, know that this is an absolutely essential step in rebalancing the body after birth control.

Stress is not just the mental/emotional aspect that we have always been taught it to be, but rather it’s really anything that causes our body to be put into a “flight or fight” stage. When we are in this mode, our body starts to break down things like digestion, our immune system, and our detoxification system (like the liver).

Types of stress can include: not getting enough sleep, not exercising enough or exercising too much, food sensitivities, mineral imbalances, vitamin deficiencies, chemicals we put on our skin through beauty products, and medications.

Birth control is a medication and stressor on the body because it’s causing our hormones to get out of balance. The pill suppresses our natural hormonal rhythm while it gives us doses of synthetic versions.

Even while on the pill, you’ll want to find ways to manage stress becuase all the different types of stressors we come into contact with add up and can really exhaust the body out.

Here are some of the ways to reduce stress:

While those seem super simple (because they are), they can have a HUGE impact on reducing stress overall.

In addition to stress impacting the liver, the pill also puts added stress on the liver because it has to process out any excess hormones.

Excess hormones, along with other toxins that the liver has to process, can get backed up and lead to inflammation. Inflammation throughout the body is similar to when you twist an ankle…but this is happening internally, which can lead to symptoms.

The more we can support the liver in doing its job, the better it can help us to remove toxins from the body.

Here are a few ways to support the liver:

Birth control affects our digestion by reducing the beneficial bacteria in our guts, leading to an imbalance between the good and bad bacteria.

When our gut bacteria is out of balance, it can open up a door for pathogens like parasites, yeast, H.Pylori, and fungus to take up residence. When that happens, it can lead to a whole host of symptoms and set us up for additional infections/illnesses.

Additionally, a lot of our hormones are made in the gut such as melatonin and serotonin. If our gut is compromised, then these hormones tend to be produced at a lower rate. Melatonin helps us sleep and serotonin is our good mood hormone…two things we definitely don’t want to be diminished!

Some of what I mentioned above for the liver apply here too, but here are a few others that help digestion:

Step 4: Learn the four phases of the monthly cycle

While most of us were only taught about one phase of our monthly cycle – our period – there are actually 4 phases with our natural hormonal rhythm. Knowing these well can be massively helpful.

Our bodies desire different foods, exercise, social activities, affection from our partners, and more throughout the month.

Our energy fluctuates naturally as our normal hormonal rhythm ebbs and flows all month long. Knowing where we are in our cycles and how our energy and mind are going to be in any given phase, gives us the opportunity to plan our lives accordingly. We have different gifts we can tap into within each phase, which are really a woman’s superpower 🙂

It also helps us know exactly when we’re fertile so we can plan sex around that. Remember that our fertile window is only 6 days per month; the rest of the time, as long as our hormones are balanced and in rhythm, we are not.

When we support our body with what it needs at various parts of the month, she responds in kind. Periods are WAY easier and PMS can be non-existent – to the point that you may not even realize your period is about to start.

The four phases are:

Because birth control is a stressor and affects digestion and our livers, we are at risk for vitamin and mineral deficiencies.

Some of the key nutrients we are at risk of losing are B vitamins and several minerals such as magnesium, phosphorus, zinc, and selenium. Also, our nutritional requirements for vitamin C, vitamin A and vitamin E increase quite a bit because our bodies metabolize these differently.

Additionally, we are also at risk for increased levels of copper, iron, calcium, and cadmium.

I’m not a big fan of just taking a bunch of random supplements without knowing what exactly my body needs because I wouldn’t want to take the wrong thing if, say, I am actually in excess of that.

That’s why I believe that it’s really important to get some testing done. A simple hair test can tell you exactly what nutrients your body is in need of so you can strategically pair the right foods and supplements with exactly what your body is lacking.

Even if you aren’t planning on getting off birth control anytime soon, I think it’s just as important to run a test to find out exactly what you need to support your body with. If you work with a good practitioner, such as myself, that person will also be sure to provide you with specific strategies to support stress your body is experiencing, your liver, and your digestion.

If you’re tired of trying to figure this out on your own, check out my Activate program or book a free call with me where we can discuss what symptoms you’re experiencing and see how I can help!